National food safety standard systems provide the backbone for supervision of wine products in China. In 1984 the former Department of Light Industry released QB 921-84 Wines and Their Test Methods, the implementation marked the beginning of standardized manufacture of wines in China. From 1994 to 2004, the industry standard “QB/T 1980-1994 Half Base Wine” left a regulatory loophole open allowing manufacture of blended wines with chemical components. The market chaos caused by this oversight didn’t end until 1st Jul 2004 when blended wines were officially banned. Following this China began more reform of wine-related standards and rules, including the drafting of new standards and provisions. In 2013 former NHFPC (now NHC) was created and replaced the former Ministry of Health. After institutional reform in 2018, National Health Commission (NHC) replaced NHFPC and is responsible for setting national food safety standards in accordance with provisions in Food Safety Law.

1. The growing demands for imported wines

China is one of the world’s most promising emerging wine markets. As a result of the booming Chinese economy, recent years have witnessed an explosive expansion in the demand for imported wines.

In the past domestic brands such as Changyu, the Great Wall and Dynasty have accounted for around 90% of total domestic wine sales. The historically poor market share occupied by imported wines was partly due to Chinese consumers’ unfamiliarity with foreign brands and also associated with the inherent lack of wine drinking culture in China.

Globalization has caused a massive transformation in the Chinese consumer mindset. Chinese consumers are increasingly looking for high quality imported wines. This demand coupled with a change in drinking habits amongst the younger generations has provided fertile ground for growth in the imported wine sector. Wine-drinking has taken root in the more developed east of China where the upwardly mobile middle-class is seeking alternatives to their more traditional upbringings. France remains the dominant exporter with a market share of 35.7% of all imported wines in China as per the data from 2013 while Australia and Chile as new world wine makers are quickly gaining ground.

Recently the Chinese government has launched a new initiative aimed at strictly controlling government expenditure on receptions, vehicles and overseas trips, also known as “the three public consumptions”. Since its implementation the reduction of superfluous spending has been accompanied with declines in sales of a range of products including imported wines. This move has had a significant impact on high-end wine sales as previously governmental purchasing represented a significant proportion of total sales. Considering that growing interests among domestic consumers the future prospects of imported wines especially table wines are extremely bright despite the government anti-corruption reforms.

In view of the treaty with the World Trade Organization, import tariffs of agricultural products (wine products contained) in China shall be cut below 5% before 2015 when the extended transitional period of 15 years will come to an end. With costing reduced, imported wines will be more competitive than ever before.

2. China's regulations and standards for wines

Most regulations overseeing the importation of alcoholic beverages generally apply to that of wines. In addition, there are also some specific regulations and standards made regarding the manufacture, procurement, sales and other aspects of wines.

Before QB/T 1980-1994 Half Base Wine expired on 1 Jul 2004, water-blended fruit wines were permitted for sale in China and could be labeled wine. After the standard was repealed China began a widespread reform campaign targeting relevant standards and regulations bringing about a well supervised regulatory system backed by sound legislation.

The Food Safety Law is the foundation and most important food safety legislation in China. Most of wine-related regulations were built upon this stable base.

Several provinces and cities have already had localized alcohol administrative regulations implemented, which have successfully stimulated the smooth development of regional alcohol industry. There is no lack of comparable precedents since overarching regulations for other special foods like dairy, genetically modified foods and salt have been formulated. Article 101 of Food Safety Law has already laid a legislative keystone for construction of a stable alcohol administrative and legislative system. (The Law shall be applied to the safety management of dairy, genetically modified foods, raw pork, alcohol and edible salt, except as otherwise stipulated, Article 101, Food Safety Law)

Since Geographical Indication Product Protection Regulation became effective in 2005, Champaign, Bordeaux, NAPA VALLEY NV and several other terms have gained geographical protection in China. This regulation is quite linked to similar regulations like EU’s Protected Designations of Origin (PDOs), and will help reduce the number of counterfeit products in the Chinese market.

General Administration of Customs (GAC)'s main supervisory scope is the import and export inspection of wines.

National Health Commission (NHC) holds the obligation of drafting and releasing national standards related to wines.
*China has undergone department restructure in 2018. If you are confused about the competent authorities, please click here to read more.

4. Tips on wine export to China

There are several checkpoints that wine exporters, agents and importers should pay attention to when trading wines in China.

4.1 The filing of exporters or agents with GAC

According to Administrative Provisions on Filing of Importers and Exporters of Imported Foods (former AQSIQ Order 55 of 2012), overseas exporters or agents shall fulfill record filing obligations with GAC through the filing management system (http://ire.customs.gov.cn/) prior to exportation. The application form for filing should be submitted through the online platform with information such as authentic names of the exporter or agent, country/region, address, contact person, phone number provided.

After submitting the application form, exporters or agents will receive a file number and an inquiry number produced by the filing management system and with these numbers they can check their filing proceeding status and amend filing information.

4.2 The filing of importers or domestic agents with GAC

Consignees (importers or domestic agents) shall apply for filing at local industry and commerce department; the documents required may vary in different ports but in general are required as follows:

4.3 USA's wine export certificate (applicable to US wines only)

As was agreed with the US competent authorities, General Administration of Customs and former AQSIQ jointly announced that since 1 Mar 2014 a wine export certificate will be used as a multi-purpose certificate for wine products exported to China. Hence Certificate of Origin, Certificate of Health Sanitation or Certificate of Authenticity/Free Sale will no longer be issued from US authorities for the Chinese wine market. (Notice No. 164, 2013 of AQSIQ and GAC)

5. Requirements of labeling in Chinese

Imported wines in China require back labels in simplified Chinese corresponding to original labels and products attached prior to market circulation. There are two options: use label stickers placed on top of the original labels before the batch of wines is exported to China or conduct the process at port/bonded area. Either way requires compliance check after arrival. 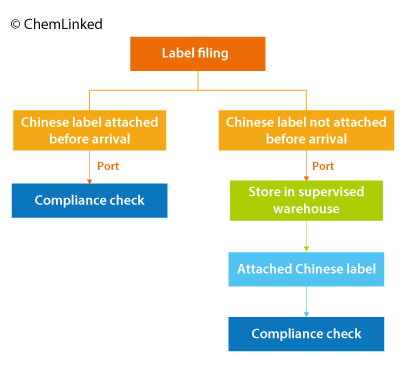 Information such as country of origin, filing date shall be consistent with documents provided by the exporter or overseas agent. Filling dates require certificates of bottling dates provided by producers.

If specific information outlining awards and accolades are included certificates and other valid proof shall be submitted for check.

In accordance with GB 7718-2011, the health warning “过度饮酒有害健康”, which means excessive drinking will harm your health, shall be presented on the label.

On condition that the original label is not fully covered by the Chinese one, the foreign language content exposed shall be translated and presented on the Chinese label.

High tariffs have been imposed on imported wines in China which in turn will raise the retail prices. In general, the tariffs of bottled wines are as follow:

Import tariff: Tariff rate of wines for most favored nations: 10%.

The sum total rate of tariffs for bottled wines should be 33%. VAT and consumption tariffs also apply to domestic wines.

For bulk wines of more than 2 liters per package the imported tariff rate is 20% (under MFN condition) provided single packaged products of less than 2 liters remains at 14%.