The designation of the food should contain the common name of its principle ingredients, e.g. apple juice, instead of Malus domestica (scientific name of apple) juice. In case of mixed or blended food, the label should have “mixed/blended (appropriate designation of food)” printed.

2.1 Special indications that should be labeled below the designation or description of the food

When a product falls into the following two cases, relevant statements shall be inserted below the appropriate designation of the food.

Ingredients, other than water, food additives and added nutrient should be labeled in descending order of proportion by weight.

3.1 The labeling of ingredient that causes hypersensitivity

If the food contains ingredients known to cause hypersensitivity, the ingredients shall be declared on the label. Such ingredients are as follows:

For further information, please check the Guideline to Label on Hypersensitivity [4].

3.3 Ingredients derived from animal or obtained through modern biotechnology

All food labels shall include a statement on the minimum net weight or volume or number of the content of the package. The height of the lettering in the statement shall be uniform.

5. Name and address of manufacturer/importer/country of origin

In the case of imported food, the labeling of this part should include:

The list of foods for which listing the date is mandatory is as shown in below. Foods that are not listed below may also list the date but the format shall be as prescribed by the food labeling regulations.

The listing of date on food labels shall be shown in one of the following formats: 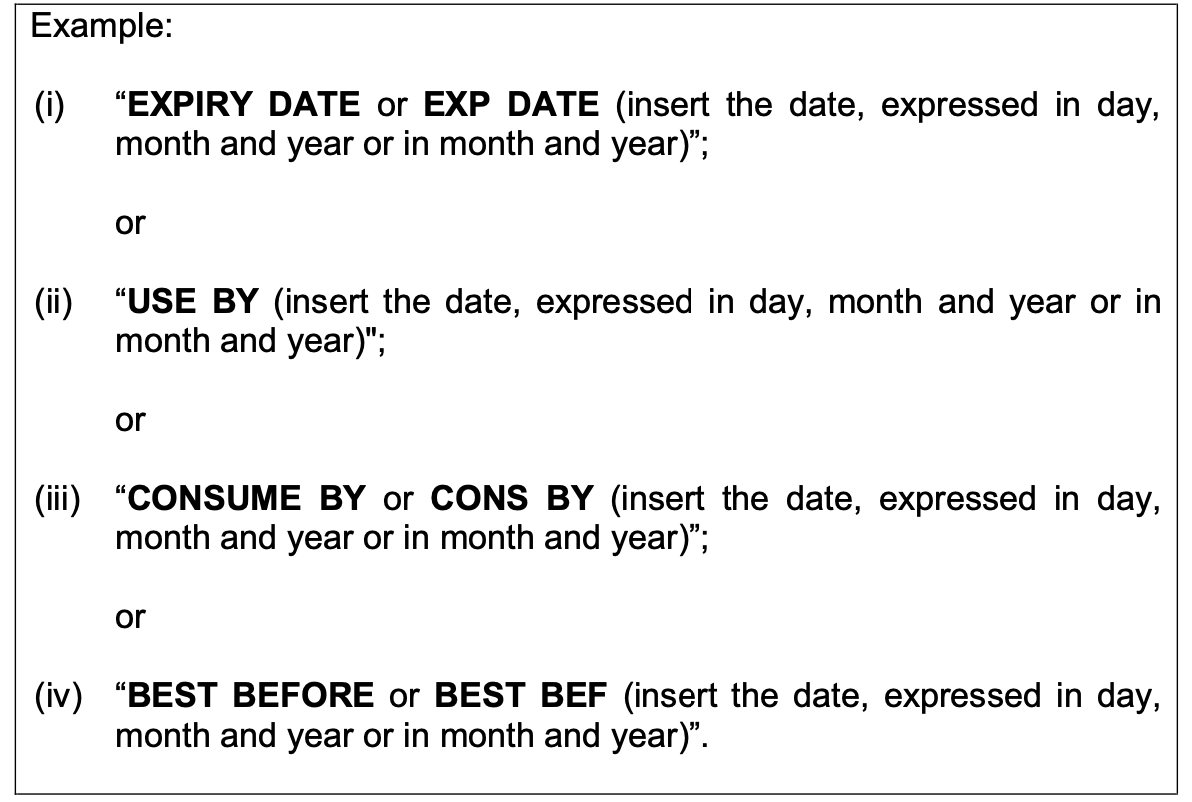 The following statement and claims are prohibited to be labeled on products except as otherwise provided in these Regulations:

“Nutrition labeling” means a description intended to inform the consumer of the nutrient content of a food. Nutrition labeling shall not apply to any packages that have a total surface area of less than 100 cm2 and returnable glass bottles, provided that no nutrition claim is made.

Unless otherwise provided in these Regulations, the nutrient content relating to food shall be provided for all products specified in regulations as shown below:

Information on nutritional value shall be expressed in the form of per serving and per 100 g (ml). The mandatory nutrients to be declared shall be energy, protein, carbohydrate, total sugar, fat and sodium.

Only vitamins and minerals listed in the nutrient reference values (NRV) and present in amounts of at least 5% per serving shall be declared in the nutrition information.

“Nutrient content claim” means a nutrition claim that describes the level of a nutrient contained in a food. This type of claim should follow the Table I and Table II of the Fifth A Schedule. For example, where the energy content of a food is not more than 4 kcal per 100g, then the food can claim “Free Energy”. 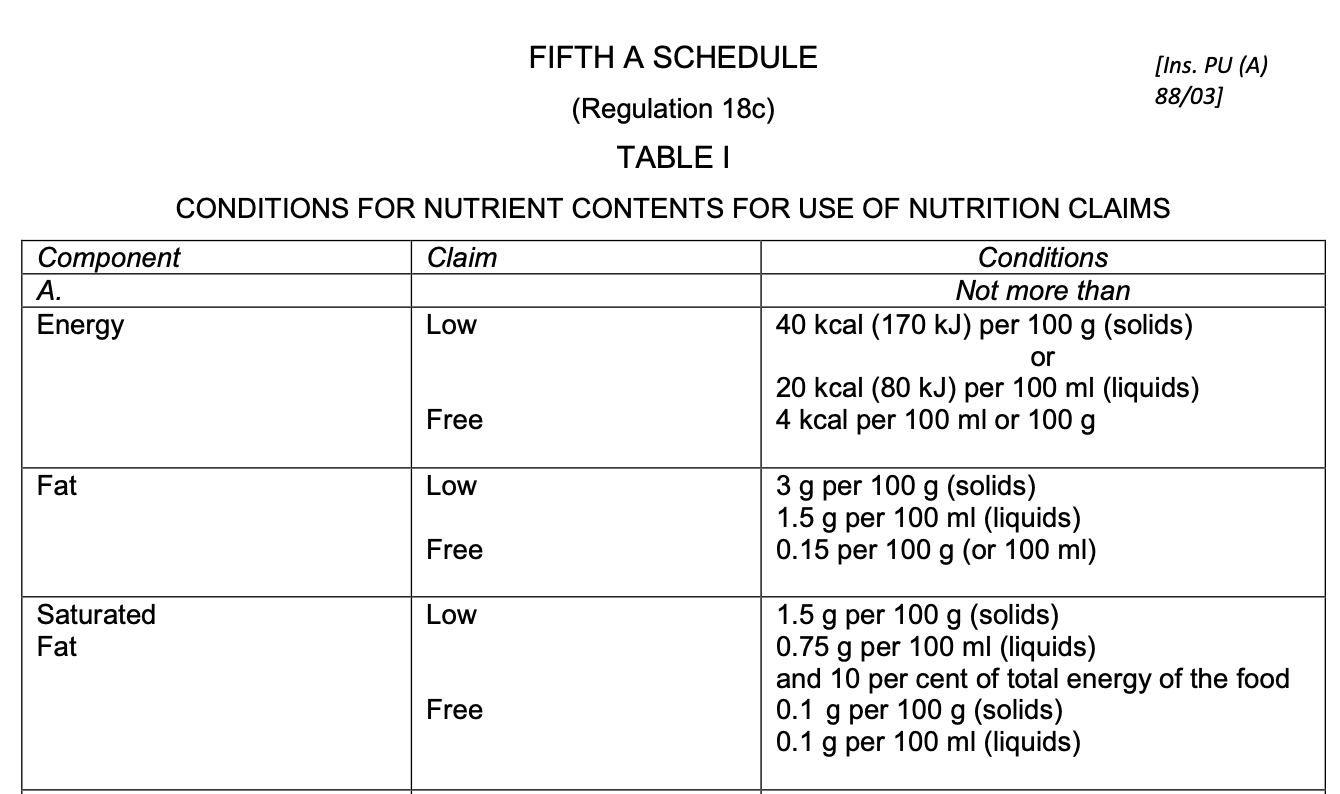 “Nutrient comparative claim” means a claim that compares the nutrient levels or energy value of two or more foods, with words like “reduced”, “less than”, “fewer”, “increased”, “more than”, “light” or “extra”.

Nutrient comparative claims should be labeled after conforming to the following conditions:

“Nutrient function claim” means a nutrition claim that describes the physiological role of the nutrient in the growth, development and normal functions of the body. But it shall not imply or include any statement to the effect that the nutrient would afford a cure or treatment for or protection from a disease.

Only the nutrient function claims or any other words of similar meaning as specified in Table III to the Fifth A Schedule shall be permitted to be specified on a label. E.g., when the folic acid content of a food is over 60 μg DFE per 100 g, it can label “Folic acid is essential for growth and division of cells.” 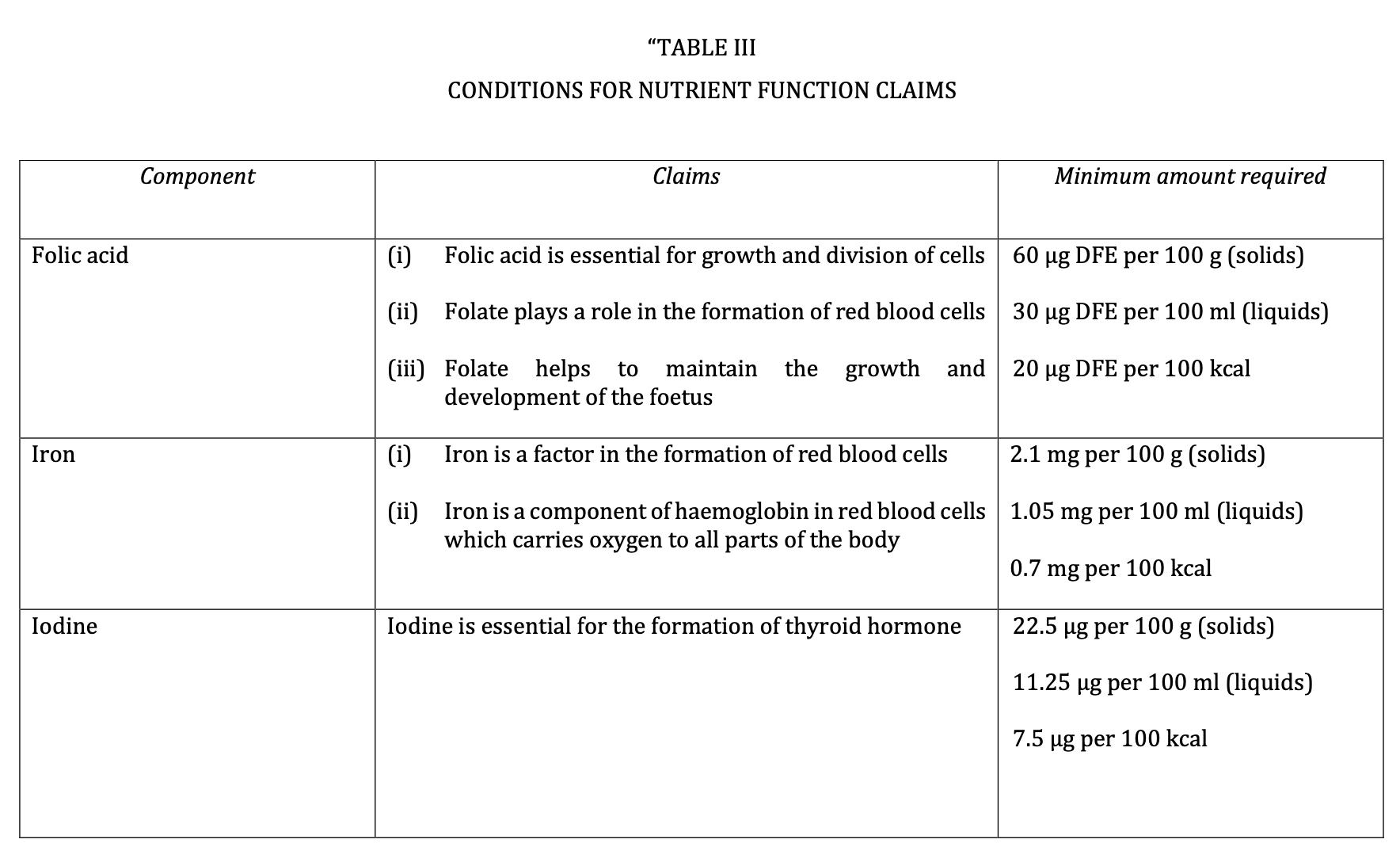 It means a claim that describes specific beneficial effect of other food component in the food that gives positive contribution to health or improvement of a function of the body. Any other function claim shall not imply or include any statement to the effect that the nutrient would afford a cure or treatment for a disease or protection from a disease.

Food can label the function claim only when the food is made complies with the minimum amount of the other food component and other conditions specified in Table IV to the Fifth A Schedule. E.g., only satisfy the three conditions listed in Table IV, it is compliant to label “Beta glucan from (state the source) helps to reduce cholesterol.” 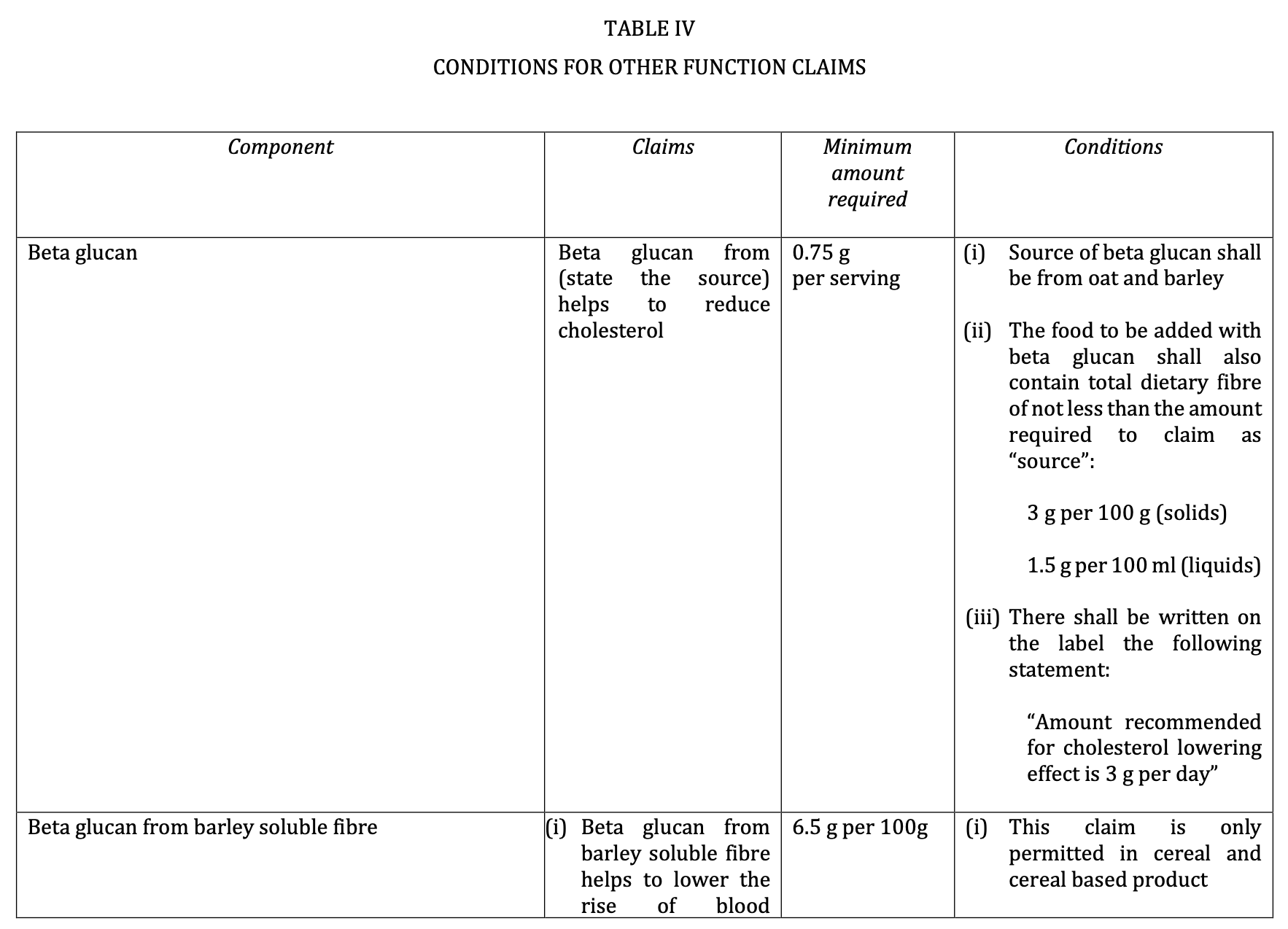